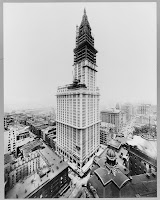 In a recent reading on my daily Bible reading schedule for the year, I once again read the account of the Tower of Babel in Genesis 11.  I used to wonder what the issue was with the people wanting to make a name for themselves.  Was there something wrong with wanting your life and accomplishments to be meaningful and significant?  Was there an issue with working to have a reputation and legacy that lasts for generations?  I also wondered about what the problem was with building a city.  Most of us live in a city, or in proximity to a city.  There are many good things that come from the city.  Even if you live in a remote rural place, you typically get supplies, medical treatment, education, and other useful things from the city.  What was the problem with an impressively tall tower?  Are structures such as the Washington Monument or the World Trade Center somehow evil?

I wonder what was going on in the minds of men as they built a magnificent city with its impressive tower that reached into the heavens in Babel.  I remember reading that the Mesopotamian translation for Babel was “Gate of God,” but the Hebrew translation is “Confusion.”  Did they intended to reach God by building a gate to the heavens?  Was this one of those Ancient Near Eastern towers that archaeologists have discovered with the long, tall stairway all the way up to the top?  If the size and scale of these are impressive by modern standards, I can only imagine how impressive they would have been by ancient standards!

Isn’t it comical then, that even as high and impressive as the tower was, that God still had to come down from Heaven to see what they were doing?  This made me wonder about God’s concern, “Behold, they are one people, and they have all one language, and this is only the beginning of what they will do. And nothing that they propose to do will now be impossible for them.”  I am pretty sure that this was not the omnipotent creator feeling threatened by man’s puny accomplishments.  Perhaps the concern was with the attitude of man.  Through growing in strength, knowledge, and ability, nothing would be “impossible” for man.  They were living life on their own terms.  They even built a tower into the heavens, seemingly to meet God on their own terms as well.

This is the height of hubris.  The only stairway to Heaven is the one God builds.  I am reminded of the stairway that Jacob saw at Bethel in a vision.  Unlike the Tower of Babel, this stairway touched the earth and actually extended into Heaven with angels ascending and descending on it with God at the top of the stairway.  With this stairway, God showed Jacob that he was with him wherever he went.  This was not something Jacob could have built.  It was a gift from God.

I am also reminded of what Jesus said to Nathaniel when he said, “You shall see heaven open, and the angels of God ascending and descending on the Son of Man.”  This reminds me that the only stairway to God is not one that I can build, but one that Jesus builds for us.  He is the only way to the Father.  I can only come to God humbly on his terms, not my own.  I cannot build my own religion and expect to reach God with it.  This is arrogance and pride, and the Bible says that God is opposed to the proud but gives grace to the humble.

This attitude often expresses itself with words such as, “I know that the Bible says_____, but I don’t accept that.  I believe ________ about God.”  This is what the pride of building a tower into the heavens looks like.

So, it seems that God’s concern that “nothing that they propose to do will now be impossible for them” was about man’s attitude.  As with the case in Genesis 3 where man tried to be “like God” by doing this without regard to God, man once again did the same thing with the Tower of Babel affair.  Building a tower into the heavens was the start of another man-made religion, which is idolatry.  Instead of magnifying and glorifying God’s name, man tried to make a name for “himself,” which also amounts to idolatry.  The most deceitful form of idolatry is when man makes an idol out of man because it does not look like religion.

But, if I avoid idolatry and serve God, is it wrong to want to make a name for myself?  People want to be remembered.  It could be a building project, like the Woolworth Tower in Manhattan, which was once the tallest building in the world.  However, even though the name lived on, many people had no idea who Frank Woolworth was.  Whether it is an endowment in the name of a person, an institution, or a building, people want to try and make a name for themselves that lives on.

I need not worry about making a name for myself.  God is the only one who can make a name for me that counts.  Every now and then, I read a story about how archaeologist have discovered a building or city in the dirt.  Who were they?  What did they do?  What were their names?  How many names have been forgotten throughout human history?  I don’t know, because they have been forgotten.  On the other hand, my name is recorded in God’s book.  Unlike other books or monuments, it will not pass away.  What I do for God in fulfilling his purposes is the only thing of lasting significance.  It doesn’t matter whether people of this earth stand up and take notice and build a monument to my name, because this, like everything else, will rot and pass away.  However, the true treasure in Heaven will never decay or pass away.