Bible Reading Reflection (Gen 27-29): Where is My Life Focused? 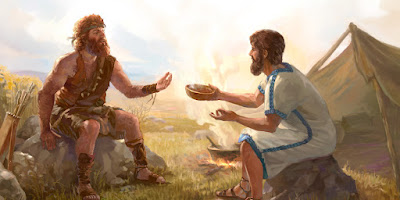 It was not uncommon for God’s chosen family to act less than honorably.  The recent daily Bible readings covered Isaac and their two sons, Jacob and Esau.  We usually refer to them as Jacob and Esau, but I wonder if they were originally referred to as Esau and Jacob because Esau was older?

I have contemplated the events that led to the rise of Jacob over his brother with puzzlement.  Why did God bless Jacob who took what should have belonged to Esau?  Why did their mother conspire to steal what belonged to one son to give it to the other?  What kind of mother does that?  Why did the chosen family have so much drama from generation to generation?  It occurs to me that none of these things are unusual among human beings.  Family drama seems to always be part the story of many families.

Several details stand out in these events.  Before the brothers were even born, they were struggling with each other.  Yahweh told Rebekah that there were two nations in her which will be divided, one would be stronger, and the older would serve the younger.  Did she tell Isaac?  Did he know?  The text does not say.

Esau did not seem to care about his birthright as the older son.  He sold it away to Jacob for a single pot of stew.  Even though he despised his birthright, he would later come to regret it.  This seems to paint a picture of Esau as an impulsive person who is ruled by his passions rather than a sense of destiny from God.

In addition to this, Esau married before Jacob.  He married two Hittite women and they made life bitter for Isaac and Rebekah.  The text does not mention how, but I wonder if any of it does not stem from the fact that they were of a different ethnic and religious background.

When it came time for Isaac to give the final blessing to his posterity, he was going to give it to Esau, and not Isaac.  All of these details - from the prophecy that Yahweh told her about the older serving the younger, to Esau selling his birthright, and his marriage to Hittite women rather than those of his own clan, may have been the motivation behind Rebekah's conspiracy to make sure the blessing went to Jacob, the one whom God had chosen.

There was one final thing that Rebekah wanted to see happen.  She did not want Jacob to marry Hittite women as Esau did.  She went to far as to tell Isaac that her life would be over if Jacob married a Hittite woman.  So Isaac sent Jacob to Rebekah’s brother, Laban, in Haran to find a wife from his own clan and charged him not to marry any of the Canaanite women.  Before he went, Isaac blessed him, saying, “May God Almighty bless you and make you fruitful and multiply you that you may become a company of peoples.  May he give you the blessing of Abraham to you and your offspring with you, that you may take possession of the land of your sojournings that Gave gave to Abraham.”  Giving him the blessing of Abraham shows a clear sense of the big picture from God that did not seem to be important to Esau at all.

What a contrast!  Esau did not care about God’s big picture, and Jacob spent his entire life grabbing at the heels of what God had already determined would be his!  What lessons should we draw from this?  I don’t often hear people draw lessons from Jacob, who acted less than honorably.  I don’t often hear lesson from Esau either.  However, the Bible draws lessons from both of them. I am reminded of two passages from the book of Hebrews that draw lessons from both Jacob and Esau.

In Hebrews 11, which gives numerous examples of faith, it says, “By faith Abraham obeyed when he was called to go out to a place that he was to receive as an inheritance. And he went out, not knowing where he was going.  By faith he went to live in the land of promise, as in a foreign land, living in tents with Isaac and Jacob, heirs with him of the same promise.  For he was looking forward to the city that has foundations, whose designer and builder is God“ (Heb 11:8-10).

Jacob, along with his father, Isaac, and his grandfather, Abraham, is an example of a life of faith.  This shows that faith is tied to hope, which is always looking forward to the distant future.  The takeaway is not Jacobs heel-grabbing, deceitful designs on trying to get what God had already determined would be his.  The takeaway is that he lived in life in the shadow of the destiny that had God had planned.

In Hebrews 12, the text gives an exhortation using Esau as a negative example.  It says, “Therefore lift your drooping hands and strengthen your weak knees, and make straight paths for your feet, so that what is lame may not be put out of joint but rather be healed.  Strive for peace with everyone, and for the holiness without which no one will see the Lord.  See to it that no one fails to obtain the grace of God; that no “root of bitterness” springs up and causes trouble, and by it many become defiled; that no one is sexually immoral or unholy like Esau, who sold his birthright for a single meal.  For you know that afterward, when he desired to inherit the blessing, he was rejected, for he found no chance to repent, though he sought it with tears” (Heb 12:12-17).

The text describes Esau as one who let a poison root grow in his life that caused trouble and defilement.  It refers to him as sexually immoral and unholy.  He evidently did not regard himself as holy to the Lord, as can be seen by all his actions.  He did not feel any obligation to Yahweh’s plan for the future.

This message, be like Jacob and not Esau, is focused one thing:  Hope.  Faith is the assurance of things hoped for, according to the opening lines of Hebrews 11.  The examples in Hebrews 11 of faith is not a list of people who had no flaws and shortcomings, but a list of people who lived their life in commitment to the shadow of the future which God had promised.