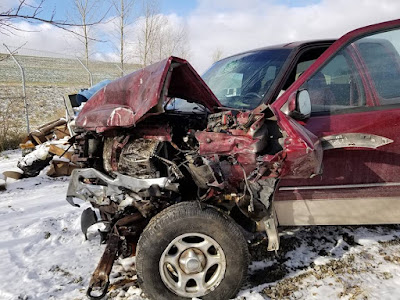 God is good.  Praise God.  Thank you Lord.  Those phrases have been a constant refrain over the last few days.  One of my sons, Jeremy, was involved in a very bad accident when he had a near head on collision with a semi.  The weather was bad that morning and there were many accidents.  I had no idea that my son would be among those involved in the accidents that morning.  A few days after the accident, we were buying some medical equipment and furniture for the house in preparation for Jeremy returning home from the hospital.  In our conversation with an employee, we talked about why we were buying the furniture.  After describing the accident and where it happened, she said that she and her kids had heard about his accident on the radio.  It was really bad.  The semi had to be towed away and Jeremy's pickup was smashed.  He was a little disappointed that his truck is totaled, but is more thankful that he himself is not totaled.  It will be a long recovery, but he is alive and still with us.  Jeremy said that he is so fortunate because it could have been so much worse than it was.  I told him that I do not know the name of his angel, but God had to have sent an angel to protect him during the crash.

God is good.  Yes he is.  But is he good because Jeremy survived?  Yes, most definitely.  But what if Jeremy had not survived the crash?   This thought hit me like a mac truck after the experience of seeing  Jeremy's smashed and twisted truck in the impound yard.  Even if Jeremy had not survived the crash, God is still good.  I had to ask myself would I still bless the name of the Lord as Job did?  Would I still say that God is good?  I am thankful that I do not have to answer that question from personal experience.  Regardless of how circumstances look on the surface, God is good.  He is on the throne, he allows things to happen, he makes things happen, and somehow in his infinite wisdom that is beyond our eyesight, he works things out for good.  Why? Because he is good.

I am reminded of the 107th Psalm that says, "Give thanks to Yahweh, for he is good.  His loyal love is everlasting.  Let the redeemed of Yahweh say so."  Some days it is easy to declare that he is good.  Other days it is harder and is more of a matter of faith.  However, regardless of how I feel about it, or how I understand it, God is good.
Posted by John at 9:27 PM No comments: