Note: This might be unsettling, so before you read on, please understand this is part of my journey of faith, and you many not see or understand the spirit of our age and its affect on us in the same way I do. I am so thankful that God is a gracious God and does not require perfect understanding, but faithfulness. I love my Lord, and I love the church that he love so much that he died for. This is not meant to be conclusive, but I share it here to spark introspection and discussion about what is happening among us. 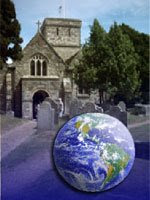 The interesting thing is that these shifts enable us to look with a more critical eye with the strengths and weaknesses of the previous paradigms and cultural assumptions. While Christians in the west are still affected by the Christendom and Reformation paradigms, the most recent Enlightenment paradigms has had the most profound effect. In fact, it was the enlightenment paradigm that produced the greatest amount of division among churches in the United States. This was far from the intent of many of the religious leaders of the 18th and 19th centuries. The goal was unity of the Christian church. The enlightenment led to a thought in the west that there was a scientific methodological solution to everything. We only had to investigate and test all the available data to improve the human condition. There was a very positive feeling in the air that gave the West a feeling of destiny and progress. This affected the church deeply. The same scientific mindset was applied to Christianity. Since scientific truth was deemed to be objective and true, what was needed was a scientific study of the scriptures to produce an objective truth to which all Christians could subscribe to, thereby producing unity. The Bible became more of an object to be analyzed and dissected. If rational logic and science produced advances in other disciplines, it was thought that the same would apply in Biblical studies. Not only would enlightenment ways of thinking with its rational thought, logic, and scientific outlook improve the human condition, it promised to improve the religious condition as well. The assumption that humans were capable of much led to little need for the power of the Spirit or of grace. The inherent sinfulness of man and the need for grace and faith that dominated reformation thought melted away in the enlightenment years. Many Christians believed that their effort to improve the human condition and religious condition was going to usher in the millennial reign of God. Many today call this "post-millennialism," which dominated most religious movements, including churches of Christ. This belief was heavily affected, like so many others, by the spirit of the age. Due to the civil war and two world wars, we don't hear much about post-millennialism any more. It has given way to the more pessimistic pre-millennialism, which believes things will get worse rather than better, as post-millennial thought did.

In part, the project failed. Instead of unity, more division resulted. Various religious groups used the same scientific, objective mindset in approaching the scriptures and believed they found a blueprint for true Christianity and for the church. Some codified them in the form of creedal statements and "confessions of faith," others merely propagated them in journals, which many people regarded as almost authoritative. There arose a certain dogmatism among many religious groups. They arrived at their "truth" using commonly accepted methods, yet not everyone arrived at the same conclusions. The result was that many churches began to emphasize aspects of them that were different than everyone else. In other words, they defined themselves in terms of other churches whom they deemed as incorrect, or even apostate. Their focus was on their distinctiveness in relation to other churches rather than in relation to the Bible or of the world at large. In all of this, there was not a big push for missions or evangelism. The revivals of this period were in part a reaction to all of this. The church began more and more fragmented. Using the same framework, how could so many come up with various conclusions?

This highlights some of the shortcomings of human reason, rationality, and the scientific method. Perhaps this is not the way God intended for us to read the Bible. Perhaps the word is supposed to analyze and dissect us rather than the other way around. Perhaps we need to read and meditate rather than merely scrutinize and analyze. Is it up to us to find the key or method in order to understand the Bible? Is it only by our intelligence and enlightened minds that we can apply the "correct" hermeneutic and interpretive principles or have the message of the Bible shut out to us? It is interesting that indigenous cross-cultural churches that have not been indoctrinated with western Christianity do not treat the Bible the same way many westerners do.

All of this can understandably and rightly be very unsettling. This is talking about seeing things in a much different way than we are accustomed to. But this is nothing new. Remember how people reacted when they heard the contention that the universe does not revolve around the earth, but that the earth revolves around the sun? Or how people reacted with the contention that the world was round and not flat? The list can go on and on. Some of the same dynamic is at work. Our paradigm is shifting. As a result, the way we read scripture, how we apply it, and the way that will look is also changing. Many are beginning to realize that the message is not an impersonal blueprint, but the message is a person, Jesus Christ. God didn't endeavor merely to give more scripture, but to produce a human model in Christ. He himself IS the message.

Wouldn't this destroy the church? Will it to lead to further fragmentation and division? Not if we understand the nature of Christian unity. Unity is not based on 100% agreement on all points of doctrine (Rom 14). In fact, you can have different convictions on some things and still be unified according to what Paul says in Romans 14. Paul never emphasizes who is right and who is wrong in Romans 14 because that was not his purpose. His purpose was to unite the church in the love of Christ. In fact, Paul explicitly states that when a person is true to his convictions to the Lord, the Lord accepts him, and we have no right to condemn him who the Lord has accepted. We need to understand that unity is first and foremost the work of God (Eph 2). It is God who unites us all together in Christ. We need to strive to keep the unity of the Spirit in the bond of peace (Eph 4). If unity is first and foremost the work of God, then that means we do not create it, we preserve it. Indeed, Paul does not say to "create" unity, but to "preserve" unity.

This is not an easy task. A look at the problem the church had from the very beginning with the Jewish Gentile problem demonstrates this is no easy task. One solution might have been the creation of Gentile churches apart from Jewish churches. Two "denominations" if you will. This was unacceptable to Paul. Even though they had different convictions, if they divided, they would not reflect the body of Christ. We serve one God, not two Gods, a God of the gentiles and a God of the Jews. We had to be one. In fact, Paul emphasizes the oneness of God and therefore the oneness of the body and our faith in Ephesians four. Only one people of God. Is it possible to have people in the one body with different convictions? Paul certainly believed so. Paul explicitly says that the principle underlying the preservation of unity in Romans 14 is love.

What does this mean? It does not mean we dispense with Christ, his atoning work on the cross, or his resurrection. That is anathema and the spirit of the Anti-Christ. It does mean that we need to proceed with love, humility and grace. If we reject someone whom God has accepted because they have differing convictions about certain things, then we are wrong. Jesus was more condemning of the Pharisees and their attitudes than any other people. Many official religious groups have their own traditions of men that they tout as authoritative in a similar way that Pharisees did. It is easy to point a finger at everyone else in this regard, but when you point a finger at someone else, you have three others that are pointing right back at you.

Once again, humility, love, and grace is what we needs to characterize us. If we have this, I believe that we can be much more effective in carrying out the mission of Christ. Instead of focusing on our "distinctiveness" in relation to other churches, we can focus on the mission that Christ has left us with. We can truly begin to walk in his shoes and take his challenges to us seriously. As Jesus left heaven and went to where those in need were, we can leave our distinctive church buildings and go to where the hurting, poor, and oppressed are and invite them into the freedom, peace, and joy found in Christ. We can be a people of peace and joy and love. We can be the city set on a hill. We can engage in what Christ was most passionate about, which were ministries of compassion, which brought good news to the poor, downcast, and the oppressed.

Perhaps the more authentic expression of the Christian faith has more to do with practice than profession.

It is not my intent to be dogmatic about any of this, but merely to attempt to be honest about looking at myself and the tradition in which I was raised. I love Christ, and I love the church that he died for. I am in the process of recommitting myself to the Reign of God and am re-learning what it means to take the challenges and example of Christ seriously and with grace.
Posted by John at 11:23 AM 1 comment: