Reflections on Sharing the Gospel 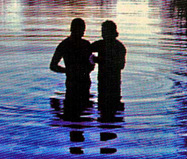 I was reminded the last couple of weeks of why the church exists.  Jesus calls us the salt of the earth and the light of the world.  He told his disciples to make disciples of all the nations, baptizing them in the name of the Father, Son, and Holy Spirit and teach them to observe everything he commanded them.  Paul says that we are ambassadors for Christ.  Peter says that we are a chosen race, a royal priesthood, a holy nation, a people for God's own possession, so that we may proclaim the excellencies of Him who called us out of darkness into his marvelous light.

There are those who claim that these instructions do not apply to us, but only to the apostles and the people of their day.  If this were true, then we would have difficulty explaining how ANY of the scriptures apply to us.  It would be nothing more than an arbitrary choosing of what applies to and what does not.  The truth is that the scriptures have been passed down to us and are for us.  John said in the conclusion of his gospel that many more things could have been included, but what had been selected is there so that we could believe.  Paul said that all scripture is inspired of God and profitable for our instruction.  The church does not exist merely for itself, but for the world.  It is through us that the world will know that God had indeed sent Christ into the world.  It is through the church that the world hears the Gospel.  It is through the church that people experience the love of God.  No wonder the churches of the world are depicted as lampstands in the book of Revelation.

It also seemed as though many of us were under attack.  The bad news kept on coming.  Campaign workers were dealing in some cases with deaths in the family, loved ones that had been murdered, some missing, and on and on.  It reminded me of the ministry of Christ.  It seemed that all kinds of demonic and satanic activity was on the rise because they knew Jesus was on the march.  I was reminded that the church is on the march.  In spite of all this bad news, campaign workers kept sharing the Gospel and bringing people to Christ.  It was the most important thing to do.  Satan would have preferred we lose our focus, that we retreat, that we stop in our sorrow and despair.  However, God has made it clear that Satan will lose.  The gates of Hades will not prevail as the church storms her gates.  Satan will lose.

I was also reminded that ministry takes place everywhere.  On our way to and from the campaign, I was so focused on getting to where I was going, I was passing up opportunities to share the Gospel.  My Dad talked to waitresses, hotel clerks, bystanders, and any one else that would listen.  My first reaction was that this was slowing us down, but then I remembered this is what we are here for.  That is what Jesus came for.  Jesus' travels were always filled with "interruptions," and what great interruptions they were.  Jesus did some of his greatest ministry in those interruptions.  I need to slow down and allow myself to be interrupted as Jesus was, and focus on people wherever they may be.

If I am ambassador for Christ entrusted with the ministry of reconciliation, I need to stop and notice all those who need to be reconciled.  They are all around every day.  I need to not be so busy that I fail to make opportunities to connect with people in the way Jesus did when he was just sitting by a well when a woman came to get water.

Lord, help me to open my eyes to the true food, which is to do the will of God.  Help me to lift up my eyes and see that the harvest is white everywhere.
Posted by John at 11:22 PM No comments:

Power of Music and Story

It's been such a long time since I have posted to my blog. I wasn't sure if anyone has been reading it. Not too long ago, a visitor to our congregation said that he had been following my blog and it has benefited him.

Recently, I have been taking an interest in sacred music. The history of sacred music goes back as far as the Exodus from Egypt. The very first Psalm by God's redeemed people is a song that declared Yahweh to be a warrior. Yahweh defeated Pharaoh and all the gods of Egypt. He demonstrated that he is the universal Lord of all. The song commemorates Israel's redemption from slavery by the strength of Yahweh who cast Pharaoh and his army into the sea.

I occurs to me that there are many Psalms in scripture that are not in the book of Psalms. Many of them are interwoven with various stories and accounts of God's activity on behalf of his people. In addition to the Song of the Sea in Exodus 15, there is also Moses' song at the end of his life in Deuteronomy 32, the Song of Deborah and Barak in Judges 5, the song of Hannah in 1 Samuel 2, the song of David in 2 Samuel 22, a song of Asaph in 1 Chr 16, the song of Jonah in Jonah 2, the song of Habbakuk in Habakkuk 3, the song of Mary at Luke 1:46, and various songs in the book of Revelation.

There are powerful stories associated with these songs that give them deeper meaning. Some of the songs may perform similar functions to the festivals of Israel. For instance, the instructions for the Passover are actual interwoven with the narrative the festival commemorates (Ex 11:1-15:21). Observance of the Passover and other rites were never to be an empty ritual performed thoughtlessly. The story of God's redemption was to be passed on (Ex 12:26-27; 13:8-10, 14-15).

It seems that many of these Psalms along with the stories they are associated with perform similar functions. They were to be reminders of God's acts from the past. They were to encourage and strengthen by recalling who God is and what he has done. Singing the song as a response helps to etch these stories into the hearts of his people. In fact, here is what the Lord himself said concerning a song he instructed Moses to teach the people:

"Then it shall come about, when many evils and troubles have come upon them, that this song will testify before them as a witness . . ." (Dt 31:21a).

Perhaps you have seen the war veteran who may get a little emotional when he sees the flag and sings the star spangled banner with his buddies. Maybe you have felt the deep meaning in a poignant moment when one sings a favorite song of a dearly departed one. The reason they are so meaningful is that there is a story behind it all.

There are stories behind the sacred songs we sing today. It may be the story behind the writing of the song, or it may be a story of someone's experience with the song. It may be a bible verse or story that the song illustrates. Whatever the case may be, I believe that it enriches the worship if we share these stories. Whether they are printed along with the songs in the song book, or printed in a separate form, I believe that the stories that enrich the song ought to be shared.

I remember hearing about a popular song writer a couple of years ago. Many are familiar with the name, Dennis Jernigan. He wrote many of the songs we sing today, such as the newer version of As The Deer, Nobody Fills My Heart, You are my All in All, When the Night is Falling, Thank you Lord, and many others.

I was touched by the story behind the writing of the song, Thank You Lord, when I heard it a couple of years ago.

Jernigan grew up in a Christian family and discovered his musical talent at a very young age. It was also at a young age that he fell into homosexuality. He later declared that even though there were a number of reasons he fell into homosexuality, it was basically because he believed lies about his father, himself, and God. He knew that his homosexuality was wrong, but he didn't know where to turn. He didn't feel he could turn to those in the church. All he heard was hateful condemnation of people like himself. People would say, "Ship them to another country" or "They all deserve to burn in Hell!" Due to this, he believed that God would not accept him and was disgusted with him. It was sometime after he went to college that his life hit a low. He finally discovered Christian brethren who loved him in spite of his struggle. He found those who were willing to be supportive during his time of deliverance from this struggle. He discovered that God did not hate him, but loved him intensely. He eventually married and had a family, and went on to write countless Christian songs to encourage others.

He realized that part of the problem was keeping struggle with sin a secret. As long as he kept it hidden, Satan had power over him. He finally confessed it his struggle to the church, and it was as if the shackles fell to the floor. Since that time, he has openly shared his struggle which has emboldened countless others struggling with secret sin to confess as well. He knew that the world needed to know that there is hope. His story of deliverance through the power of God from his homosexuality is indeed a story of hope. It was these events that led to the writing of the song, Thank You Lord.

Listen to some of the words of the song: , "Thank you for loving and setting me free, thank you for giving your life just for me how I thank you . . ." When I heard the story behind the writing of the song, it became that much more powerful. This is a constant reminder that no matter what kind of sin we struggle with in our life, God can indeed set us free. What a powerful story. What a powerful song.
Posted by John at 4:32 PM No comments: