Following the Example of Christ 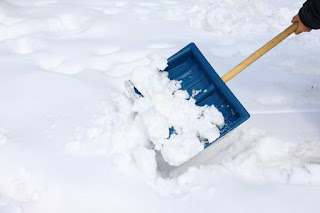 He couldn't believe what he saw. He drove around the block to see if he saw what he thought he did. Sure enough, there was a lady on a wheelchair trying to shovel her driveway with a snow shovel. He noticed many drivers going by straining their necks to see this unusual sight. "Hmmmm," he thought to himself, "I wonder if I should stop and help." There were still a bunch of errands he needed to get done before it got dark. Then he remembered, "I am a Christian. My Lord washed his disciples feet, and one of them had become his enemy." With that, he stopped the car and got out. She looked startled at first as he walked toward her. Then she smiled. "Would it be okay if I were to help?" He asked. With a smile on her face, she handed him the snow shovel. Then she said, "I am trying to clear it off so I can get in and out on my chair." The city snow plows had gone by and created a hard mound of snow at the end of her drive way. He introduced himself and then went to work on the driveway. The snow was hard and icy at the end of the driveway. There would have been no way she would have gotten it off in her wheel chair. After he finished, he looked up and saw she was still smiling. He handed the shovel back to her. The look on her face was one of deep appreciation. "Will that do it?" He asked. "Yes, and then some," she replied. "God bless, and have a happy New Year," he said. He could see the look of relief on her face that the job was done. He knew another snow would be coming, so he made a mental note to go by again and see if she might need help.

Jesus stated emphatically that he did not come to be served, but to serve (Mt 20:28). He demonstrated this toward the end of his ministry.  At the last supper, even though he was the head of the table, he got up, took off his outer clothing, wrapped a towel around his waist, and went to work washing his disciples feet Jn 13:1f).  This demonstration of servanthood must have shocked his disciples.  After all, he was their teacher and Lord.  It has been pointed out that this was the job for the low man on the household servant roster.  It would have been like that job no one wants that always goes to the new guy.  When I picture Jesus volunteering to do that task that goes to the low man on the totem pole, I begin to get a sense of why Peter reacted in the way that he did.

The text says that Jesus "loved them to the end," and therefore began to wash his disciples feet.  Love trumps pride.  Love gives generously.  Love serves above and beyond.  Love is the example that Jesus demonstrated for us.  He asked, "Do you understand what I have done for you?  You call me teacher and Lord, and rightly so, for this is what I am.  Now that I, your Lord and teacher, have washed your feed, you also should wash one another's feet.  I have set an example for you to do as I have done for you.  Truly I tell you that no servant is greater than his master…"

I need to remember that I am not greater than him that I should find any kind of service beneath me.  Love for God and love for neighbor should motivate me to serve.  I am reminded of those historical accounts where outsiders found it strange among the Christians that masters were serving their slaves.  But this is nothing unusual in the Kingdom of God.  The Kingdom turns the world's values on its head.  The nobody becomes somebody, and the somebody becomes nobody in the kingdom.  The ground at the foot of the cross is level.  God exalts the humble and humbles the exalted.  Jesus said that a mark of discipleship is to love as he loved (Jn 13:35).  Jesus demonstrated part of what love looks like in the upper room.

Years ago, I heard a story about a woman who had just about lost hope, and stumbled onto a church and walked in asking, "Is this the church that helps people?" The brethren all came together to help this single mother, from repair of her car, to helping her get a new home for her family and finding a job. She was overwhelmed at the benevolent goodwill of these brethren. She experienced the love of God through these brethren. She became a Christian and promptly began a lifestyle of also helping other people even through her humble means. She felt it a great blessing to have the ability to help other people.  This is not extraordinary, but is rather ordinary in the Kingdom of God.
Posted by John at 10:28 AM No comments: