It couldn't have happened at a better time. I had just finished preaching a sermon about light and darkness earlier that day. Jesus is the true light who "lightens up" everything (Jn 1:9). There is nothing to do in the darkness except grope and stumble.

And there I was after dark, running across the yard with the dog. Well, running until I stepped in one of his ongoing projects - a hole that he has been digging on. POP! I felt something snap in my angle…and the pain! Never felt pain quite like that. I was completely helpless laying in the yard. I couldn't get up. To top it off, the dog was climbing on me. He is just a puppy, so I don't know whether he thought I was playing or he was concerned. 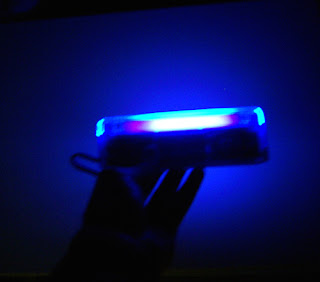 Some examples that I can think of include such things as the current way of dating. It seems rather harmless on the surface. A new boyfriend or girlfriend every week? What could be the harm? Everyone is doing it. Yet, I wonder how continuing a pattern of using people until they are used up will affect a person? I wonder how the casual going together followed by break ups desensitize people to the ravages of divorce? Whether it is for popularity, to fit in, or some other reason, is this really a good thing? A better question - is this a godly thing?

Then there is the "faith is private" message so prevalent today. I hear it often these days. "Religion should have nothing to do with public policy." Whether it is the ethics of medical research, the direction of public policies, or the education of our young people, religion no longer has a public place. God has been replaced by science, psychology, sociology, and other things of this nature. The result is voodoo science that no one sees as voodoo science. Whether embryonic stem cell research, abortion, cloning, so called' euthanasia, and other such things, the guiding principle seems to be pragmatics. But is pure pragmatics good? Many of the Hitlers and the Stalins of the world sure seemed to think so. The sad thing is that when Hitler was committing some of his most atrocious acts, much of the religious community did nothing. Faith was a private, not a public matter. In matters of public policy, the church took a hands off policy.

The scary thing is that in our country faith is considered a private matter much more so than in Europe a century ago. Professing Christians often do not see God as a relevant part of their world, only in their religious devotion. That is why you can have contradictory public figures who profess faith in God and the Bible as his word yet hold social and political ideologies that are contrary to the nature and will of God. They have divided truth up into secular truth and religious truth. Secular truth is the truth of science, history, medicine, etc. It is seen as public, objective, universal truth. Religious truth is seen as private, subjective, and personal. This is not "true" light. It is black light.

I have come to realize that "secularism" is an illusion of supposed enlightened minds. The word "secular" is less than 200 years old, so you will not find it in scripture. The concept does not even exist in scripture. Why? According to scripture, God is the creator and sustainer of the world.

"For by Him all things were created, {both} in the heavens and on earth, visible and invisible, whether thrones or dominions or rulers or authorities--all things have been created through Him and for Him. He is before all things, and in Him all things hold together" (Col 1:16-17).

This is God's world, it all belongs to him.

Many today use a world that comes from the field of anthropology, "World View." In primitive places in the world, they speak of an "animistic worldview" that sees the world and all of it objects as full of spirits who need to be appeased. In our country, there is the secularist world view that divides the world up into religious and secular. But the Biblical world view is that the world and everything belongs to God and is accountable to God.

"For since the creation of the world His invisible attributes, His eternal power and divine nature, have been clearly seen, being understood through what has been made, so that they are without excuse" (Rom 1:20).

God was involved in world affairs of people other than Israel. Some more well known examples come from Nineveh through Jonah and Babylon followed by the Persians and the Medes through Daniel. In fact, God refers to Cyrus as his "anointed" (Isa 45:1). Amos 6:2 seems to imply that God had done something among places we know nothing about.

A biblical world-view is a huge subject to tackle. There is a biblical and theological view of everything, whether it is medical ethics, politics, history, science, philosophy, or mathematics. Most classes on these subjects, even in Christian schools, do not begin with God as the foundation of whatever discipline is being studied. There was a time when biblical theology was considered the "Queen of all the sciences." This world view no longer dominates the world of academia.

The question always to ask is this - where is God in this? How does God view this? How does the nature and character of God affect this? If you are not used to thinking this way, then it will be hard. Resist the inclination to try and avoid or explain away uncomfortable conclusions, especially conclusions that suggest you need to do an overhaul in your thinking or practice. If not, then you have blacklight. It may look cool, it may draw more attention, it may be more acceptable. However, at best that will lead you into the potholes rather than the glory of the Kingdom of God. Jesus is the true light, and we need to see our lives, activity, our world through his eyes.
Posted by John at 4:51 PM