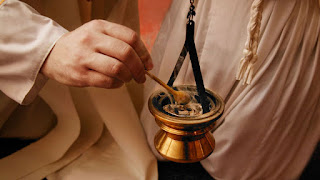 I am very familiar with the story of Nadab and Abihu.  In discussions on treating God as holy through obedience to his specific commands and instructions on how to approach him, this is often cited as an example.  Reading the text again, I am trying to picture the scene.  Fire came from God and consumed the offering made to him and everyone fell flat on their faces with a shout! What a sight that must have been!  Nadab and Abihu seem to be the only ones who were not on their faces.  Instead, they offered strange fire before the Lord which God did not command.  I don't know if it also included strange incense, but what ever they did, it was in clear disregard for the very specific instructions God had given them.  Once again, fire comes out from God and consumes them!  Aaron and his remaining sons were then instructed by God not to tear their robes or mourn them.  The rest of the people would mourn, but Aaron and his sons were not to mourn, at least not visibly.  As leaders in the sanctuary, they apparently needed to demonstrate to the people that God's response was appropriate.  They needed to keep their composure and show how important it is to approach the holy God in the way that he had instructed.  They needed to provide an example in discerning between the holy and unholy, the clean and the unclean, when it comes to approaching the Lord with and offering.

Here is what is curious.  The latter half of the chapter has an account of how Aaron's remaining sons did not treat the goat of the sin offering properly according to God's instructions.  The entire offering had been burned up!  They were supposed to have eaten part of it as God had instructed.  Moses was understandably angry at Aaron's remaining sons, Eleazar and Ithamar, especially in light of what had just happened with Nadab and Abihu.  Aaron's response was that they did this in light of what had just happened to Nadab and Abihu.  It seemed inappropriate to feast when that sin had been committed.  Aaron asked, "Would it have been good in the sight of the Lord?"  It did not seem to them that this would have been pleasing to God.  This answer seemed to satisfy Moses.

The curious thing is why was this deviation seemed to be accepted.  Why did God strike down Nadab and Abihu, but not Eleazar and Ithamar?  Maybe it had something to do with what God desired and had communicated.  "By those who come before me, I will be treated as holy, and before all the people I will be honored."  Eleazar and Ithamar surely understood the gravity of the situation.  Their refraining from feasting does not seem to stem from treating God flippantly.  They attempted to honor God, but it must have seem less than honorable in light of the sin of Nadab and Abihu and God's response to be feasting on that day.  They apparently chose to fast instead.  This was something they had apparently put a lot of though into.  Perhaps they agonized over it.  Their desire was to honor God and please him.  Maybe this is why God responded to Eleazar and Ithamar differently than he did to Nadab and Abihu.

If I am correct in understanding this correctly, it says something about God.  He has never been interested in obedience that amounts to empty compliance.  It is not about conformity to arbitrary rules.  It is about what is going on inside of me.  As a husband would hardly delight in his wife's heartless and outward acquiescence to his desires, how much less would God delight in me if I do something similar?  The greatest command according to Jesus is to love God.  This is to be the root of my relationship with God.  All that I think, say, and do needs to grow out of this one command.  God only delights in my fruit when all of my devotion grows out of this command.  This is why God is deaf to meaningless repetition and ritual or any other heartless words directed towards God.  In fact, words and service without love has the same effect as a clanging gong or cymbal, which indicates that God may find it repugnant and irritating rather than pleasing and beautiful.  Motivation is just as important, if not more important than the activity itself.  Wrong motivation can cancel out a right action.

Lord, help me to grow in love for you above all else.  Help me to understand your presence.  Help me to understand what it means to love and honor you.  Water the root so that my love for you can grow and bear all kinds of fruit that is delightful to you.  I want every branch of my life be connected to love for you.  I cannot do this on my own.  I am often selfish and clueless.  Fill me with your Spirit.  Thank you Lord for your patience and mercy.
Posted by John at 11:46 AM