Studying the history of creeds is interesting. The earliest creeds arose in reaction to heretics who were teaching heresy concerning the nature of God and Christ. They served to unite the church in sound doctrine against false teaching. When the church and government became fused, resulting in the paganization of the church and the christianization of society, many abuses, aberrant practices, and erroneous teachings flooded into the church. Worldly values such as power and authority overshadowed biblical ones such as humility and meekness and deeply affected the leadership of the church in a negative way. With the Reformation came an explosion of reform movements all over the world. In order to unite and define their distinct belief and practice, these movements formulated creeds. These dizzying array of creeds tended to divide and fracture these movements into various sects, all claiming to be true Christianity.

On the American frontier, there were two "Great Awakenings." During this time there was an emphasis among many people on going back to the Bible alone. One of the mottos from this time period was, "No creed but the Bible." Many leaders believed that if we discarded denominational names and creeds, we all could unite upon the simplicity of the Gospel as presented in the Bible. We would all be simply, "Christians," nothing more. This was a vast improvement on former movements that tended to formulate creeds that tended only to bring more division and more Christian sects. Effort of many of these pioneers were designed to move away from sectarian Christianity on the basis of the Bible alone as the basis for unity.

Churches of Christ and Christian Churches are descendents of this back-to-the-Bible movement. Historians have often said that one of the greatest strengths of this movement was its emphasis on biblical teaching and authority. The article in Mead's Handbook of Denominations in the United States says that it is remarkable that Churches of Christ, without any centralized government, headquarters, or creed, have the level of uniformity that they do in regards to doctrine and practice. There was for the most part a large degree of unity among Churches of Christ based in large part on biblical teaching without an official creed.

However, some in their zeal to return to the Bible may have missed the big picture and have neglected the weightier matters of scripture. There is an emphasis on the Bible, but not a greater emphasis on what is more central in the Christian faith.

This seems to be to sort of thing that many scribes, doctors of the law, Pharisees, and Jews had done. Jesus said, "You search the scriptures because you think that in them you have eternal life; it is these that testify about me" (Jn 5:39). Faith in God wasn't primarily about counting out each grain of wheat or spice to make sure it equals exactly 10%, or about not lifting a finger to do anything that remotely looks like work on the Sabbath, or about making sure you were thoroughly ritually washed. These were not bad things in themselves. However, these in themselves did not endear the people to God. The reason they did not is that these folks had neglected the weightier matters, such as justice, mercy, and love. They knew their scriptures, but didn't know God. To them, God was reduced to a set of rules. They often elevated the wrong rules. There seems to have been a religious debate on which commandments were the greater commandments. This is probably why Jesus was asked which is the greatest commandment. The rules that these Pharisees, Jews, lawyers, and scribe elevated indicate what God was like to them. To them, God was not relational, but a rule giver and a accountant of who keeps all the rules.

Those who know God reflect the vary character of God. That is why John says, "He who loves is born of God and knows God because God is love" (1 Jn 4:7). God IS love! Love is one of the central aspects of his character. That is why Jesus elevates Love as the greatest commandment (Jn 13:34-35). That is why justice, mercy, and kindness, and other "relational" things are weightier matters. The commandments flow from one of the most prominent characteristics of God. These Jews had missed this because they had reduced God to a set of arbitrary rules. This is not to say that God does not have rules, because he most definitely does. But his rules flow from his character. Some are more central than others. Some are "weightier." The greatest expression of God's character, of his love and relationship is when Christ becomes flesh, lives among us, fully identifies with us in our humanity, and dies on the cross as one of us. This is the high point and the central thing in scripture. Everything points to it. The "rules" God has that flow from this are the weightier matters of the law.

These are things I remind myself of when I read scripture. If not, Jesus could just as easily say to me, "John, you search the scriptures because you believe that in them you have life, but it is these that testify of ME!" Everything beginning with Genesis and ending with Revelation points not to a set of arbitrary rules, but to Christ, who is God in the flesh and the ultimate message and explanation of God and his character. If I miss that in my study of scripture, then I have truly missed it.

Remember that the word of God is the Sword of the Spirit (Eph 6:17). It is the Spirit's primary tool to transform you into the image of Christ. We also need to keep in mind that we are encountering scripture that is "inspired" (2 Tim 3:16). More literally, this verse says it is "God-Spirited" or "God-Breathed." It is from the breath of God, and it is only the breath of God that gives life (Gen 2:7; Eccl 12:7). This is why the word of God is said to be "living" and "active" (Heb 4:12). You cannot read it the same way as you read Plato, Shakespeare, and other great literary works. Indeed, the Bible is a great literary masterpiece, but it goes far beyond this. Jesus said that his words were spirit and life, or "breath" and life (Jn 6:63). Jesus also said "I am the resurrection and the life" (Jn 11:25). Furthermore, Jesus said "I am the way, the truth and the life" (Jn 14:6). In other words, the God breathed scripture is not merely a manual to memorize, but a tool of the Spirit to bring us to Christ, who is our life.

So, here is a suggestion on reading scripture. Studying scripture is beneficial. But don't limit yourself to just studying the scripture. Set aside time to merely read it, not dissect it, do word studies, and things of that nature. Let God "breath" new life into you through his God-breathed word. As you read the Gospels, dialogue with God. Ask things such as, "What are you telling me here? How does this point to Christ? What does this say about you God?" Read the Psalms regularly as part of your personal worship. Read the great accounts of God in the Old Testament to learn what he is like. Read the epistles of that deal with specific issues of the Christian life, remembering that Christ is the foundation of the message in the epistles. Read the book of Revelation, and see how all of human history culminates with Christ, the faithful and righteous divine warrior. 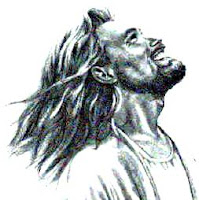 Indeed, Christ is the source of true life, and scripture bears witness to Christ. The motto, "No creed but the Bible" is a good one, but I believe we can improve on this even more. Since the scriptures point to and bear witness to Christ, and since Christ is the fullness of Deity in bodily form (Col 2:9), God in the flesh (Jn 1:14), the exact representation of God's nature (Heb 1:3), and the explanation of God (Jn 1:18), you could correctly say based on this,

"Our Creed is Christ."

What a powerful statement. Spend some time in reflection on this and how it might affect the nature of your Bible reading.

This is Kiran from India. I have red the complete blog. Its truly inspiring and wonderful blog.