Jesus came to "save" people. It seems quite natural to understand this as saving us "from" our sins. Everyone is lost and doomed to spend eternity in Hell, therefore Jesus came to "save" us by dying on the cross for our sins. I had heard this for so long that anything else seemed unnatural. What more could there be than this?

"… for she was saying to herself, 'If I only touch His garment, I will get well.' But Jesus turning and seeing her said, 'Daughter, take courage; your faith has made you well (Greek: from sozo, 'saved you').' At once the woman was made well" (Mk 9:21-22).

"And answering him, Jesus said, 'What do you want Me to do for you?' And the blind man said to Him, 'Rabboni, I want to regain my sight!' And Jesus said to him, 'Go; your faith has made you well (Greek: from sozo, 'saved you').' Immediately he regained his sight and began following Him on the road" (Mk 10:51-52).

"When the herdsmen saw what had happened, they ran away and reported it in the city and out in the country. The people went out to see what had happened; and they came to Jesus, and found the man from whom the demons had gone out, sitting down at the feet of Jesus, clothed and in his right mind; and they became frightened. Those who had seen it reported to them how the man who was demon-possessed had been made well (Greek: from sozo, 'been saved')" (Lk 8:34-36).

The passage could have said "you are healed," using one of the Greek words for healing or cure, rather than a word that means, "to save." This suggests that saving someone from sin or physical ailment was part of the same package. There was no tension between the two. Jesus did not come merely to deal with what will happen to us after we die. He was not merely interested in our souls as a disembodied entity separate from our bodies. He was interested in us as a whole person.

The way Jesus conducts his ministry from the very beginning seems to bear this out. When Jesus first announces that the Kingdom was near in both Matthew and Mark, he begins an assault on evil, sickness, demon oppression, religious oppression, and everything related to sin and oppression.

In Matthew, Jesus begins his ministry preaching that the Kingdom of Heaven was near and began preaching the Gospel, or "good news" of the Kingdom (Mt 4:17). Then he calls his first disciples and begins an all out assault on oppression from sickness, disease, and demonization (Mt 4:23-25). He continued his assault, even attacking religious oppression at the hands of people such as the Pharisees. One thing that often goes unnoticed in this passage is that his ministry also included gentiles.

Mark follows the same pattern. Jesus begins by announcing that the Kingdom of God was near and that people must repent and believe the Gospel, or "good news (Mk 1:14-15)." For the next several chapters, he begins an assault on the oppressive strongholds by healing the sick, casting out demons, and befriending tax collectors and sinners, people whom the religious elite saw as unfit for the kingdom.

In Luke's account Jesus begins his ministry with a quotation from Isaiah 61.

"And He came to Nazareth, where He had been brought up; and as was His custom, He entered the synagogue on the Sabbath, and stood up to read. And the book of the prophet Isaiah was handed to Him. And He opened the book and found the place where it was written, THE SPIRIT OF THE LORD IS UPON ME, BECAUSE HE ANOINTED ME TO PREACH THE GOSPEL TO THE POOR. HE HAS SENT ME TO PROCLAIM RELEASE TO THE CAPTIVES, AND RECOVERY OF SIGHT TO THE BLIND, TO SET FREE THOSE WHO ARE OPPRESSED, TO PROCLAIM THE FAVORABLE YEAR OF THE LORD" (Lk 4:16-19).

Jesus begins to do this after he leaves the synagogue that day. He engages in ministries of compassion by healing and befriending hurting and broken people. He brought freedom, dignity, hope, and joy to those who had been oppressed and downcast.

He was anointed not only to announce the good news to the poor, but also to free the captives and the oppressed, which he begins to do after leaving the synagogue that day. Jesus preaches the "Good News of the Kingdom" with ministries of compassion, healing the sick and the demonized, feeding hungry people, touching the outcasts, and getting involved in the lives of the marginalized. The purposes of his miracles appear to be much more than merely confirming his message. He could have done wondrous feats, such as making the temple disappear and reappear, but he didn't. He was demonstrating what the Good News of the Reign of God was all about. God was bringing wholeness to broken people. His holistic ministry incorporated a fractured people into a beautiful patchwork that he called the body of Christ. Jesus establishes a group of disparate people that are fiercely devoted to each other out of their devotion to God. This is why some pagans made comments about the church such as, "see how the love each other" or "there is not a beggar among them" or "they along know the right way to live." This is a testimony to the healing, compassionate, holistic ministry of Christ.

This ministry does not end with Jesus. He commissions the 12, and latter 70 to do what he had been demonstrating. In Luke 9, Jesus commissions the twelve to go out with healing ministries, proclaiming the Kingdom of God. Later, in Luke 10, he commissions seventy people to go out and do the same. The central message was the Kingdom of God. It is in the kingdom where there are no beggars. It is in the kingdom where there is healing. It is in the kingdom where wholeness can be found. In the end, Jesus sends out his disciples into the entire world to do as he has done (Mt 28:19-20), to engage people with the Gospel (Mark 16:15), which will involve ministries of compassion. Of course, the model for how this is to be done is found in ministry as Jesus demonstrated it. Jesus was training his disciples and leaving us a model to follow. This is why he says, "As the father has sent me, so also I send you (Jn 20:21). Jesus is our model.

This demonstrates that there is a clear social dimension to the Gospel. In years past, the term "Social Gospel" has received criticism from evangelicals. Some of the criticism of is warranted, especially in the cases where social concern is not rooted in the character and mission of God. However, this does not mean that God is not socially conscious. It does not mean that God is not concerned about the poor, the outcasts, the marginalized, and the oppressed. Jesus confronted oppressive powers and principalities not with a worldly revolution of power and coercion, but with a revolution of the heart. An apt image as to how Christianity confronts the world is the image of leaven (Mt 13:33). Jesus said the Kingdom of Heaven is like leaven. It is hidden in the dough and works from the inside out. As kingdom people, are to be engaged so that we can be that leavening influence.

The Good News of the Kingdom is proclaimed not merely by profession, but by practice. It is to do as Jesus did, and get involved. It is to walk as he walked, and be willing to get our hands dirty. It is to act as he acted, and be willing to take risks. Jesus does not call us to something "safe." He made in clear in Luke 10 that we are sent as sheep in the midst of wolves. But the image of the slain lamb that rose from the dead and was exalted in Revelation 4-5 gives us strength, because in God's kingdom, sheep are stronger than the wolves and are victorious.

As Jesus was engaged, so to the church, the Body of Christ must be engaged as leaven with ministries of compassion, proclaiming the Gospel both in words and in practice, which gives credibility to our message.

Anyway
From the wall of the Children’s Home in Calcutta of the Missionaries of Charity,
the Order of Mother Teresa

People are unreasonable, illogical and self-centred

If you do good, people will accuse you of selfish, ulterior motives

If you are successful, you win false friends and true enemies

The good you do will be forgotten tomorrow

Honesty and frankness make you vulnerable

Be honest and frank anyway

What you spent years building may be destroyed overnight 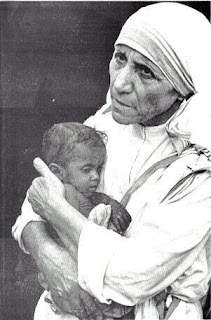 Evangelical Christianity seems to have allowed Paul's definition of *sozo* to be read into the rest of the Bible. This is done, of course, by forgetting the context of Paul who was writing to many Gentile audiences whose lieves were spent gratifying their flesh. As you point out, the meaning of "to save" is much more dynamic and has much more to do than just sparing someone of eternal judgment. Good post!