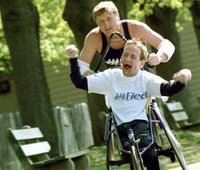 I recently read about Rick Hoyt, a man who has been severely disabled from birth. During birth, the umbilical cord wrapped around his neck and strangled him, leaving him severely brain damaged. He is unable to talk, walk, or use his hands. Doctors told his parents that he would never be anything more than a vegetable and that they should just put him in an institution.

Rick's father, Dick Hoyt, was unwilling to accept this. He could see in his son's bright eyes that he was not a vegetable. After taking him to the engineering department at Tufts University and fitting him with a computer that he can use to communicate by tapping a button with the side of his head, they began to communicate in a way they hadn't before. This enabled Rick to do so much more. Not only did Rick graduate High School, he also went on to college and got a degree in special education.

When a classmate was injured and the school organized a charity run for him, Rick typed out to his dad, "Dad, I want to do that." 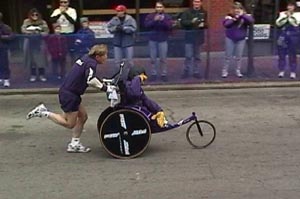 Dad was not an athlete and not in shape, but he did it anyway. When they started the five mile race, many of the people watching thought that Dick would push his son down to the corner and come back. But he didn't. He ran the entire five miles. Afterward, Rick typed out, "Dad, when we were running, it feels like I'm not even handicapped!"

So began the first of many races, which not only included marathons, but triathlons as well. Some have told Dick that he ought to try racing on his own without Rick, since he does well even towing his disabled son around. But Dick never does. Dick makes it clear that the motivation for his running is for his son Rick to be able to live a normal life. Rick cannot race without his Dad, Dick, and Dick will not race without his son, Rick. They are called "Team Hoyt." Rick's father has become his arms and his legs in the race.

Here are a couple of videos that chronicle the highlights of this amazing journey.

After watching these videos, I was stuck by a father's love for his son. Dick gave up so much for his son, but never does he ever regret it. Rick can do none of this without his father, so his father has become his arms, his legs, his strength. Dick outputs and amazing amount of time, effort, and energy for his son. They do everything together. What an amazing father!

It occurs to me that this is sort of the way it is with my Heavenly Father. My sins, which twisted my life, rendered me a powerless and slave to them. He took those sins and bore them upon himself. He bore them out of love for me. I can do nothing without my Father. Without him, I would still be enslaved. It is my Father who is at work in me both to "will and to work for His good pleasure" (Phil 2:13). Truly, I can do nothing without him. I can neither will nor work to please Him.

I am still weak, but his power is demonstrated in my weakness. He carries me through life with his strength. When I sin, I remind myself that I can do no better without Him, and that I need to reconnect with Him. I cannot do it on my own. Without him, I would be stuck right where I was. The strength that I now have is really not my own. His power is demonstrated in my weakness. He gave and continues to give to me endlessly.

What a challenge this is for me! God is the model Father, and I want to be a Father like Him. As a Father like God, I need to model selfless, sacrificial love that seeks the good of others before myself. If God is the model Father for me and I try to model myself after him, perhaps my kids will get a small, imperfect glimpse of God in me. Godliness. What a rich word, full of love.

Powerful story. I saw it before when it was used in a lesson in our congregation. Thanks for sharing it here.

John - thanks for coming by my blog and commenting. I'm returning the visit, and love your story about the father and son. Great image of our father working through our weaknesses.