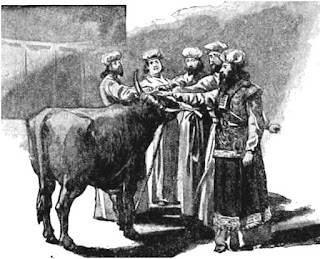 The New Testament states that the things written before are for our learning.  The law is a school master to lead us to Christ.  Even though we are not under the law that was given specifically to Israel, and not to the church, there are still vivid lessons to learn.  I need to slow down and read more carefully.  I need to ask, "What does this teach me about God, myself, and my relationship with God?"

I am struck by the fact that when there is sin among the people it is not just the priests that act on their behalf for atonement.  The elders are instructed to bring a bull for a sin offering.  Instead of pointing a finger and saying "they" sinned, the elders represent the people in making atonement for sin in the camp.  The offering required is larger than the offering required for any individual that sins.

God doesn't give the specific rationale for all these details, but the vivid visual of all of this happening brings several things to mind.

First, there is the sheer gravity of sin.  Life blood offered before the Lord shows that sin is a matter of life and death.  Sin, which is disobedience to God, forfeits what God offers in fellowship to him, which includes life.  There are sin offerings, guilt offerings, the morning and evening offerings, and more.  I wonder how much blood there might have been over time before the veil in the sanctuary and on the horns of the incense altar, and on the altar in front of the sanctuary.  These blood stains would have been constant reminders of sin, and the danger that sin poses to life and fellowship with God.

Second, there is the condition of the heart.  God instructed that these offerings were for those who sinned "unintentionally."  This was not intended as a means by which one could buy his way into sinning willfully.  Perhaps this is why the offerings were to be from the flock or the fields, and not something they picked up from the wild that cost them nothing.  There is so much emphasis on "purity" in these passages, which are supposed to teach a lesson about remaining pure.  True purity is not mere ceremonial purity, but purity of the heart.  My desire should be to have a pure heart, as the Psalm says, "Create in me a pure heart O God."  Jesus said that the pure in heart will see God.  This reminds me that outward obedience to a ritual in itself does not magically remove sin.  Obedience must be obedience from the heart, rather than going through the motions as if the actions have some magical power in themselves.  God is not like this.  He is the living God and desires a change in heart.  Whether it is baptism, repentance, prayers of confession, I need to realize that it is much more than an outward ritual, but an inward submission of the will and heart to God.

Third, there is solidarity.  It seems that the attitude of the elders was to be to act on behalf of the people rather than to point a finger at them and separate themselves from them.  As shepherds, they took responsibility for the people as a whole.  It would be similar to elders in the church having a special prayer service where they confess to God that there is sin in the body and ask for forgiveness.  They prayer is not for them, but for "us" together as a people.  As a people, "we" have sinned.  It seems to me that there has to be an attitude of humility and solidarity in order to do this.  Pride and arrogance would cause me to think in terms of "them" rather than "us."  God redeemed a people, not just a bunch of separate individuals.  I tend to think more in terms of individual responsibility, which is definitely a biblical concept, but I do not tend this think in terms of collective responsibility and collective guilt, which is also a biblical concept.  As a leader in the body, I need to take this to heart.

Fourth, there is grace.  I usually don't hear Christians talk about this in terms of grace, but what else can it be?  God has declared that he is slow to anger and abundant in steadfast love.  It is covenant love.  Because of this, God provided a way for redemption and reconciliation.  These were not arbitrary rules, but show us some lessons we need to learn about sin.  Also, these are a shadow of the ultimate sacrifice.  This is not a sacrifice that we make, but one that the Lord makes for us.  Jesus, because of his steadfast love, offered not the blood of bulls and goats, but his own blood in order to provide eternal redemption.  The New Testament says that the blood of bulls and goats could never really take away sin.  They are a reminder of sin.  It is the blood of Jesus that once for all takes away sin.  This makes sense, because the only one that can forgive sins against our Lord is the Lord himself.  He offers his life for ours.  This shows in an even more vivid way the sheer gravity of sin along with the sheer gravity of God's undying love and loyalty to us.

Lord, may I see sin as you so.  Help me to be able to look past the initial enticement to see the devastation and death it brings.  Purify my heart.  May I learn to enjoy the pleasures of life in the way that you intended with joy, peace, and holiness.  The blood of the Lord offered for me?  For us?  How can it be? How great is your love!  How great is your loyalty!  How great is your mercy!  Thank you Lord for your patience.
Posted by John at 10:28 AM