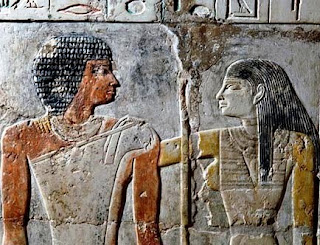 It has been mentioned at least twice in Genesis that Joseph married an Egyptian woman.  Not unusual, considering he spent most of his life there.  However, the text mentions twice that Asenath, his wife, was the daughter of an Egyptian priest.  I am not sure why these details are mentioned.  Scripture typically disapproves of Israelites marrying pagans, especially Canaanite ones.  The Canaanites were so wicked and detestable with their cult prostitution, child sacrifices, and other abominable practices that the land vomited them out.  Maybe since Asenath was an Egyptian and not a Canaanite, there is no condemnation or hint of disapproval?

As I look over the story again, Joseph is the one who is front and center as a positive example in every way.  Even though Joseph lived the majority of his life in a land that was not his home, and in the shadow of gods that were not his, and in a marriage to the daughter of a priest of one of those gods, Joseph remained loyal and faithful to his heritage and his God.  He had a clear sense of identity that never faded even when he became a powerful government official in Egypt.  Joseph did not adopt his wife's gods, but was faithful to the true God, the God of his fathers. The text does not say, but I think it is reasonable to assume that Asenath became a follower of Yahweh, and made her husband's God her God.   After all, Ephraim and Manasseh, her sons, are part of the heads of the twelve tribes of Israel.

We live in two worlds as well.  Our true home, heritage, and identity is tied up in God.  Our temporary lodging place is here.  As Paul wrote in the New Testament, "Our citizenship is in Heaven."  We belong to the Kingdom of God.  Whether my boss is a Christian or not, whether my spouse is committed to God or not, whether my family, friends, and neighbors accept Jesus or not, Joseph's example reminds us that we need to remember who we are.  It is too easy to let our spouse, job, and family divide our loyalties.
Lord, may we never forget in whose Kingdom we belong.  May we, like Joseph, never lose our sense of identity and remain loyal and faithful.  You have been loyal and faith to us even though we do not deserve it.  May we be loyal and faithful to you, the only one who is truly worthy.  Thank you for your mercy, love, and patience.
Posted by John at 11:01 PM