The State of the American Church (part 1 of 2)

I recently read a couple of articles in the "Currents" section of the Christian Chronicle that dealt with the current condition of the Lord's Church in America. Overall the church appears to have leveled off in growth, and shows signs of declining in some places. I began to do my own reflection on state of the church, and I will share them here. This is a two part series, the first deals with what I see as challenges, the second part deals with moving in the direction of solutions.

Most congregations that I know of are declining, and the members they have are aging. Overall, it seems to me that the church is sick. I believe that this has been the case for some time, but it has only become recently apparent due to dropping numbers. From my perspective, it seems that it boils down to basically these elements.

1) A misunderstanding of what our calling is to be as a church. 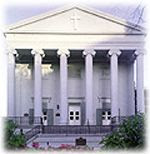 Our love affair with our church buildings along with an institutional mindset contributed to the church building paradigm for Christianity. Many believe our mission and purpose is to manage the organization. Missions, outreach, evangelism, and a number of other activities take a back burner to building centered activities. Our budgets are also a reflection of this mindset. The majority goes toward maintaining the building and building related activities, and if there is not enough left over, missions and outreach get cut. Even though it is not stated this way, this practice seems to demonstrate that the building is primary and things such as missions, evangelism, outreach, etc. are optional.

We are influenced by our culture's view of "institution." We have similar language and practices as those who belong to an "institution." We often speak of "going to church" as one might go to a board meeting. We speak of being a "member" as one might be a member of a lodge. In theory, church membership is much more than this. But in practice, membership is primarily expressed by attending meetings in the building. Staff and leaders are managers and CEOs of the institution, everyone else are members, consumers, and attenders. The result is a nominal Christianity that for many may not be a whole lot different than membership in some other institution. In this way, the church has accepted as "normal" what can only truly be characterized as "nominal" Christianity, while it views what the Bible characterizes as "normal" Christianity as something "extraordinary."

With our institutional mindset, we have lost the biblical emphasis that the church is the body of Christ. The emphasis has typically been that we are the "one and only body." What has been missing is the biblical emphasis that the church is the body of Christ, and therefore represents Christ in the world and his mission. The church's mission is not to send people, but to be a sent people. We are his hands, feet, and mouth to carry on the mission of Christ. Christ did not come to establish church buildings, but to establish the reign of God in the hearts of people. Often our priorities are backwards. Outreach, missions, etc. should be first and foremost. Anything we construct or do should support that mission and not the other way around. If, as the body of Christ we are to be ambassadors of Christ, representing his mission, it must be more than maintaining a meeting place.

From my perspective, I see a positive trend all over the world with the Lord's church. This mindset is slowly changing. It has been painful but positive. We are reexamining many of our dearly held pre-suppositions and are slowly becoming better equipped to engage the world incarnationally as Christ did.

2) Misunderstanding of our relationship to Culture, which is changing.

As I understand it, much of our emphasis over the last 100 years has been on doctrinal purity and the "distinctiveness" of the church. That distinctiveness was usually defined in terms of how we are different than the denominations rather than how we are set apart for Christ. This seemed to work well in a culture that was saturated with Christian ideas, symbolism, and language. I am not sure that the emphasis was so much on Christ as it was that we were the one true correct church. It seems that many were winning people to the church rather than to Christ. This was a reflection of our culture's emphasis on various "institutions," which affected us in ways we didn't realize. Much of our literature printed during this time period demonstrates this emphasis. Many articles and books concerning salvation approached it in terms of an idealized and oversimplified version of church history that highlighted the divisions in Christianity and our plea for unity with a call to become a member of "the one true church," namely, our church, through baptism. The church seemed to receive more emphasis than Christ. As a result of this cultural influence, the church as an institution remained squarely at the center of evangelistic writing. This mindset with its language seemed to resonate with a Western, Christianized culture. Our "Christianized" culture held institutions in high regard and was full of denominations and sects, and we engaged it head on.

However, since the culture has become increasingly secular, many of the ways we identified ourselves culturally are now lost to the citizen who has not been "Christianized." The fact is, we do not know how to engage a culture that has become increasingly secular. We do not realize that we have been shaped by our culture and that many of our practices are an expression of our culture as much as it is an expression of our faith. We have trouble separating the two, not realizing that Christianity stands above culture and therefore is translatable to many cultures, whether it be African, South American, or our North American Culture, which is currently undergoing huge changes. Like more recent missionaries who recognize the need to import the Gospel but not Western Culture, we need to recognize that our efforts in our own back yard need to be the same. Some of what we promote and hand on to is probably a form of Western Culture that is antiquated and passing away. Western Culture is not Christianity as the Bible defines it. Some of the ideas and values of Western Culture squarely contradicts the ideas and values of the Reign/Kingdom of God. If we are coming across as "irrelevant," it may be that we are promoting an older, dying form of Western Culture more than the Reign of God. This is why I believe we need to think like missionaries in our own back yard. According to statistics, there are now more Christians in Africa then there are in North America. Africa can no longer be called the "Dark Continent" as it was 100 years ago. We are (and have always been) a mission, therefore we need to think missionally.

3) A misunderstanding of what our message should be.

Since our way of doing things and our message was shaped by our culture, we speak a language that is stranger than ever to the "Un-Christianized" person. Even when we are able to communicate it in a way that can be understood, it seems irrelevant. Indeed, it often is. I believe that this is because we have not kept a biblical emphasis. While the church is important and biblical, it is not what the early church emphasized in its preaching to those outside. As I see it, themes such as the Fulfillment of the Reign of God, the Gospel, The Return of Christ, The Holy

Spirit, and a Call to Faith and Repentance were all part of the Apostolic preaching of the cross. These are not themes that we have typically emphasized. Some of these themes as the Bible portrays it are foreign to us. Our emphasis has often been to highlight what makes us different than the denominations. Whether it was baptism, Communion every first day of the week, instrumental music, denominationalism, multiple elders, etc., we emphasized those things that made us correct in comparison to the denominations. As a result, many people were won to a form rather than to a person. In a culture where a positive institutional loyalty still existed, the church appeared to thrive in numbers with this emphasis.

There is a mystical element to the Christian faith. That makes many of us in North America very uncomfortable even though African, Asian, and South American Christians do not have a problem with this. The reason is that we have been shaped by Western Culture along with its rationalism and empiricism. We have a tendency to reject anything that cannot be observed, tested, and explained. The indwelling of the Holy Spirit, the power of the word of God and things of this nature are usually de-emphasized or reinterpreted to mean nothing more than a rational exercise of our mind and will informed by a reading of the Bible. There is little mystery in the daily life of a Christian and little emphasis on the disciplines that create the right conditions for spiritual growth. For some, Bible study is not a whole lot different than reading a philosopher and becoming his "student." Much of faith is very academic in nature and a personal relationship with the Lord is little more than knowing correct doctrine. Religion is reduced to a set of rules and preaching often becomes moralizing on certain topics. There is little need for fasting. Praying is a duty rather than an expression of love and desire for God. Bible reading, if it takes place at all, is for the purpose of knowing the Bible rather than knowing God. Spirituality is where we may be the weakest of all. While we often speak of spiritual growth, we often cannot define what that means. Rather than defining spiritual growth as learning to grow in our love for God in all things, it is usually defined more in terms of the amount of Bible reading one does, the service one renders, or then number of events one attends. All of these are good, but are secondary to loving God.

This weak spirituality, I believe, lies at the foundation of the other three items I mentioned above. A weak spirituality probably leads to the difficulty for seeing the world as it really is and our assigned place in it. Without this clearer vision of our identity, we find it a very difficult challenge to know how to engage our world with the mission of Christ.
Posted by John at 11:37 AM

I really enjoyed this post! Great thoughts and allot for me to digest!